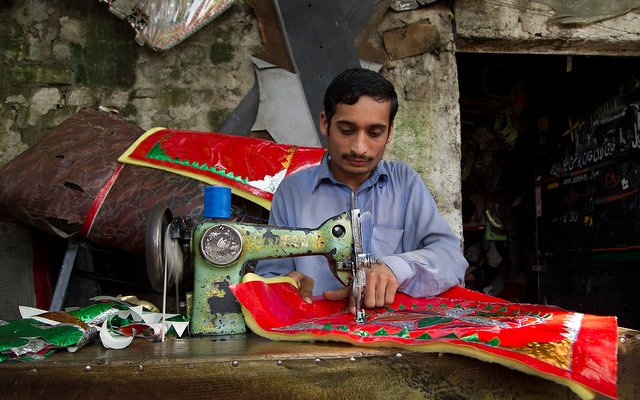 The Washington Times posted a story and slide show of the students’ work, called "Eye of the beholder: Pakistani shutterbugs unveil stunning photographs."

In a part of Pakistan where guns are everywhere, 17 young people armed only with cameras are determined to change how the world thinks about their homeland.

This week, the photographers, all from Pakistan’s Federally Administered Tribal Areas that abuts Afghanistan, showed off their work at the U.S. Institute of Peace in Washington — displaying vivid portraits of a tough, but seemingly peaceful life, a far cry from the violence depicted in the media.

HinaGul Mohmand, 25, caught the photography bug early. Her favorite picture is of the government-run primary girls’ school in Mohmand Agency where her mother was a teacher. In it, a teacher, her head and face covered in a black headscarf, reads to an attentive group of girls squatting on a sun-dappled floor.

The school has since been destroyed by the Taliban, Islamic fundamentalists who oppose education for girls. Unfazed, Miss Mohmand’s mother now teaches the girls at her home.

That grit has been passed on to her daughter, who says she is determined to use her camera to fight the Taliban’s campaign.

"Through my photographs, I want to focus on women’s education," she said.

Miss Mohmand and 16 other photographers have honed their skills at two National Geographic photo camps — in Washington and Islamabad — since 2012. The National Geographic camp is part of an Internews collaboration called "Enabling Progressive Media Voices in Pakistan."

Faryal Mohmand, 23, who is studying for her master’s degree in economics, believes she can use photography to shine a light on the problems facing her community.

"Photographs are the best way to get my message across," she said. "If I show a photograph to an illiterate person, even he will understand what I am trying to convey."

Pakistan’s tribal areas serve as safe havens for an assortment of militant groups, including the Taliban. U.S. drone attacks against suspected terrorists have focused on this region.

Since the start of the drone program, there have been a total of 357 strikes inside Pakistan that have killed militants and as well as civilians, according to the New America Foundation.

Hanifullah, a photographer from Bajaur Agency, says security in his hometown is good, but people want the drone strikes to end.

"We didn’t know who the Taliban were before the first drone strike in Bajaur in 2006," he said. "After that strike, the Taliban spread all over. If drones could end militancy, it would have ended by now."

Tribal area residents oppose militancy but want to end it through dialogue, not drones, he said.

Life in the tribal areas is tough. But life for a photographer trying to capture images in a restrained society makes it tougher.

"In Mohmand, where I live, there is no respect for photographers," said Ammad Ahmad Khan, 18.

The trip to Washington was an eye-opening experience for many of the young photographers.

A Pew Research Center poll released in May found that only 11 percent of Pakistanis have a favorable opinion of the U.S.; 10 percent express confidence in President Obama; and 64 percent see the U.S. as more of an enemy than an ally.

"When I came to America, I realized that Americans don’t hate us. That made me feel good," said Alamgir Khan, 24, from Mohmand Agency. "The suspicions we have of each other can be removed through interactions between Americans and Pakistanis."

Muhammad Khalid Afridi, 24, from Khyber Agency, said the trip has changed his perception of the U.S. "It is awesome and the people are lovely," he said.

Saeed Ullah, 26, from Orakzai Agency basked in the praise from the mingling guests.

"It’s a big achievement to do a photo exhibition in Washington, isn’t it," he said.